The Federal Government allocated funds to a national War Service Land Settlement Scheme to benefit ex-servicemen and women. Each state then ran the Scheme under its own plan and in South Australia this was through the Lands Department Executive (LDE). Applicants who had six months military service, some farming background, and who were physically fit, were eligible. They could not be in an existing “job with prospects”. They also had to attend extra training at Wingfield Training school in agriculture and/or spend a few months gaining practical experience.

Thousands were eligible but only a fraction of those who applied were successful. Some were drafted to irrigation blocks of 10 acres, some to dairying and some to broad acre farming either down the South East region, on the West Coast, or on Kangaroo Island. The Kingscote Council had written to ask for KI's inclusion as they recognised the need to expand the island's production and population. In 1947 it was decided to clear tracts of Crown Land on KI for the Scheme. Research trials in 1936 had shown that previously infertile land on the central plateau could become productive with the application of super phosphate and trace elements.

One of the requirements for the applicants was that they were prepared to work for the LDE clearing the scrub and preparing the land. Each farm was approximately 1000-1200 acres with 800 acres of pasture and the remainder scrub land. Each one was to have a house and shed, dam and basic fencing so that the settlers had a good chance of success as they hoped to avoid the pitfalls of similar schemes done after WW1.

In 1947 government supervisors and surveyors arrived and a large camp was established at Parndana East from re-erected huts from the Love-Day Internment Camp from WWII. By 1948 there were enough men and heavy equipment to start clearing the scrub and Kingscote Council was given funds for infrastructure projects, especially roads and bridges. Families moved into the huts and lived there for roughly two years while the land was cleared and blocks allocated. As one family moved out to their farm, another moved into the rolling scheme until eventually by 1963 clearing finished and all plant was sold at a huge auction.

The men were assigned into work gangs to doze the scrub, burn, rake, plough and seed the land. They were paid a wage during that time but all the costs were debited against the farms and at allocation the settler took on a debt of approximately 30,000 pounds to repay the cost of establishing the farm. The Scheme was administrated from Adelaide with oversight by the Federal Government. A system of inspectors checked the individual farmer against his proposed budget and actual stocking and activities. An Agricultural Research Centre was set up alongside the Camp to experiment and advise on strategies and practices. At times settlers found the LDE directives onerous and restrictive. The Role of the LDE was taken over by the Agriculture Department in later years.

Eventually 174 families took up farms under the Scheme on Kangaroo Island and over 200,000 acres were cleared. The settlers and their families were modern day pioneers and established sports and community centres in outlying areas as well as the new town of Parndana which was set up in 1956 to service the Scheme.

Today the western end of KI still has many productive farms, some still run by the original settler family now into the third generation, and others bought by descendants of the settlers. The settler families are still very active across the island in all aspects of the island's economy and life.

A map is attached which shows the scale of the development and its timing. 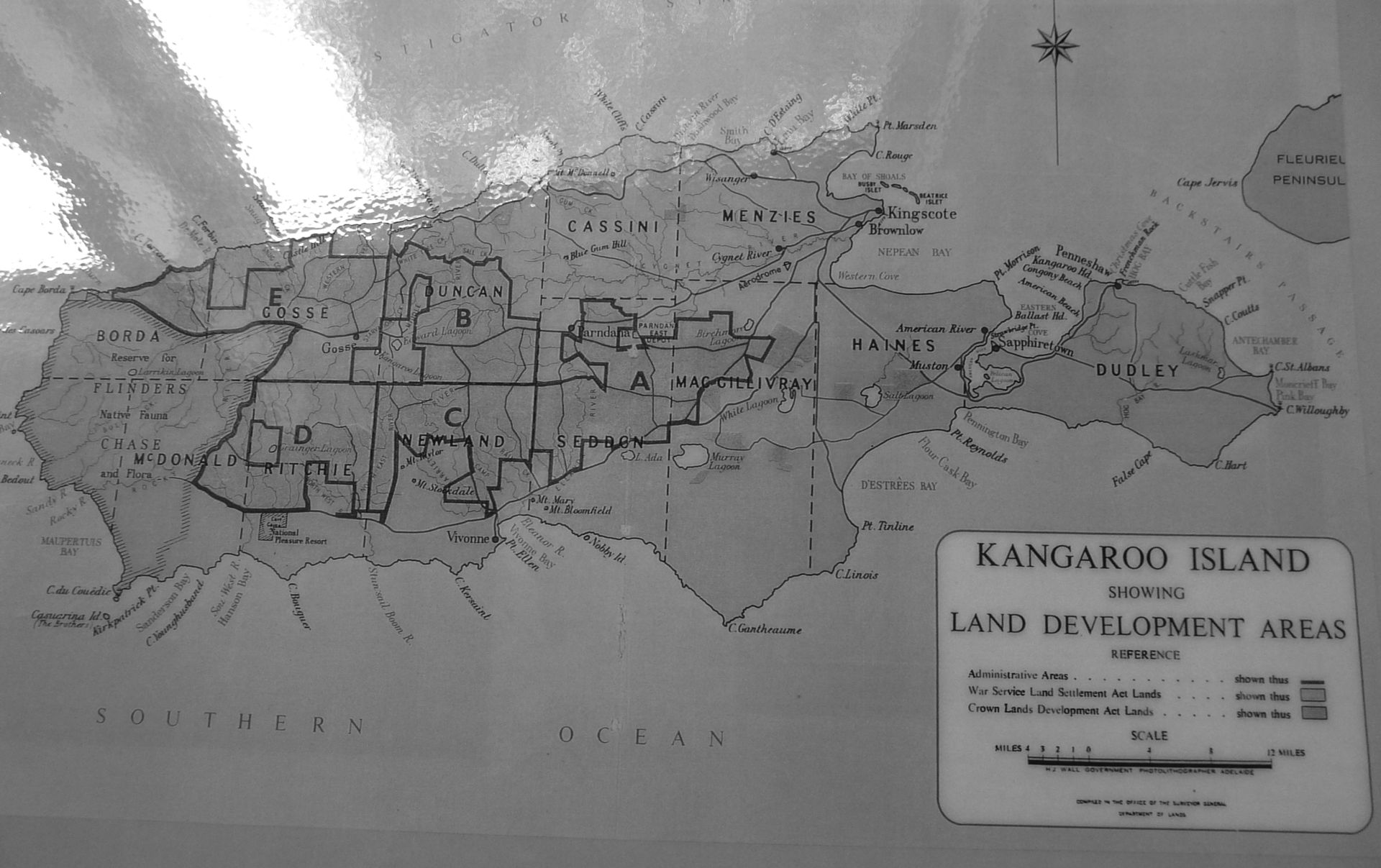